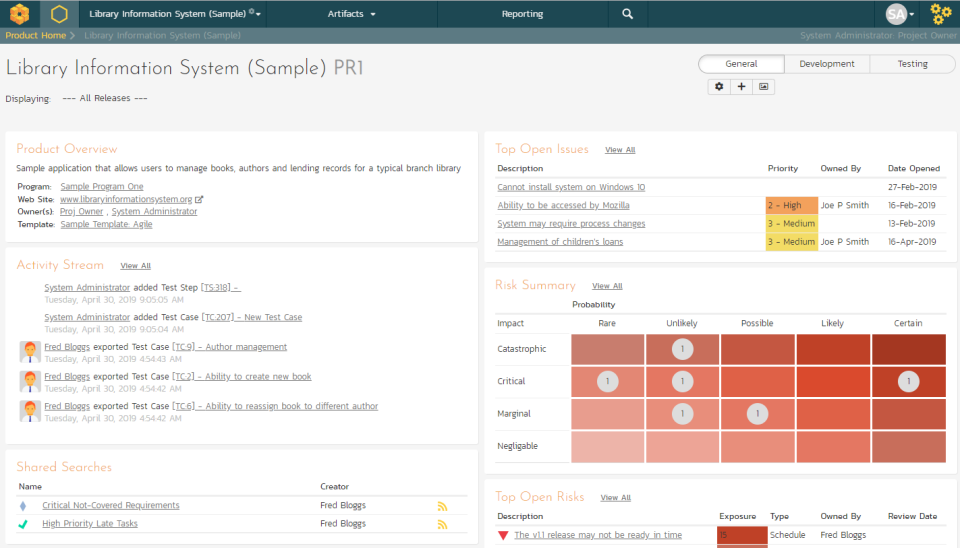 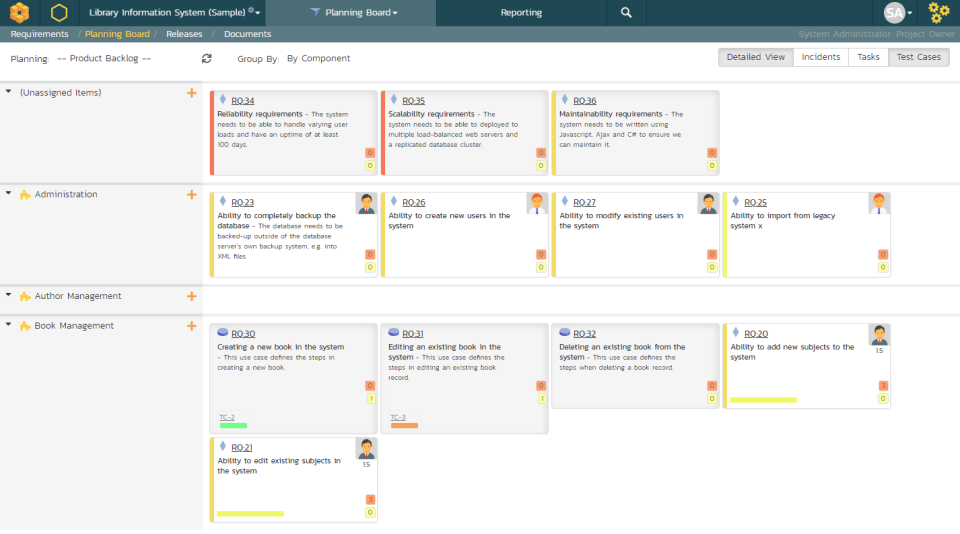 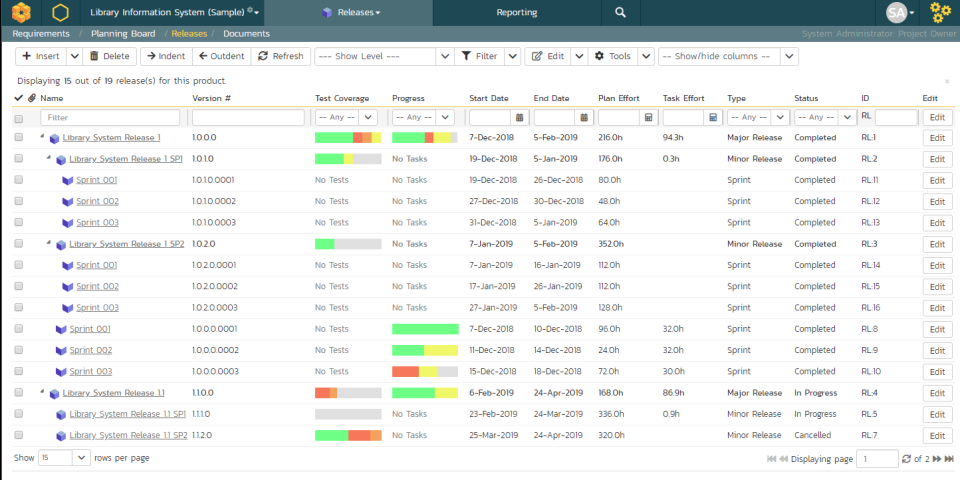 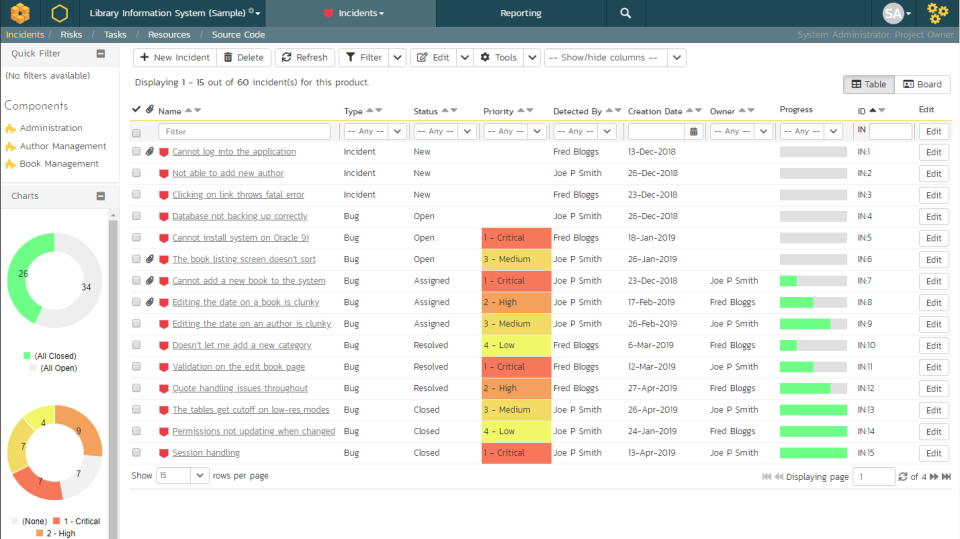 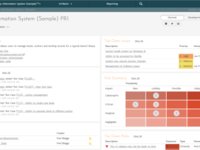 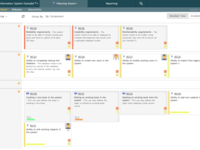 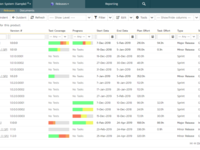 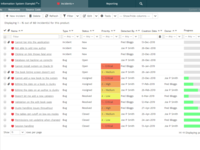 Commentaires: Very intuitive and easy to use application with custom role based access that suites any organisation.
We have run the in-house version for over four years now and nothing much to complain about and when we've had a problem the support has been fantastic.
We don't use the application to its fullest potential but extensively for test management and reporting.

Avantages: Ease of use, no client installations, supports the main browser flora, a multitude of plugins for integration with other systems. Configuration flexibility. Plenty of features to grow in to. Fantastic support team and a vendor that listens to the user base addapting and improving the application at every new release. Very reasonable licensing and support fees.

Inconvénients: I can only think of one drawback that is MS platform dependancy for the server installation and db.

Commentaires: Most excellent, brings our Business and testing together in understanding the req.

Inconvénients: Users. Misunderstanding the designed use compared to their personal opinion.

"A complete vision of the projects"

Commentaires: I was used SpiraTeam in some projects. Our work with the application was right, but our experience with it, is like a fixed application with a strongest modulation of the project process. The UI, is not very friendly with a complex form to work on it.
Is true, that you can add any document, requirement, task or other in each moment, but you cannot change the flow of the project. In action it is maddening because you has not clarity of the steps to do with the different parts of the project.
But, if you have a big project with many people that need to interact (for example, you need to follow the status of the tasks and the test cases by developer) it is your project application.

Avantages: The application can modify to adapt the workflow to your needs (based on a complex workflow). The document management is very good. You can change a part of UI (colors, logos, etc.). You can do a personal dashboard with your heat points. This could help you to focus your most important points.

Inconvénients: In my personal opinion, the application needs a guidance or a screen that can show the flow process to make more easy the entry of the project elements.

Thanks for the feedback. We are adding a new user onboarding wizard into SpiraTeam to guide a new user through the project management process that is enabled in SpiraTeam.

We're not sure which version Daniel used, but v5.0 has a completely overhauled user interface which our users are loving.

Avantages: the feauture i like mosto are remote launch, easy to duplicate project structure

Inconvénients: it's difficult tu upgrade the version. It will be appreciate a automate tool for version update

Hi Riccardo,
Thanks for the review. Sorry to hear about the difficulties you have run into upgrading your version. We released a completely new upgrading system in v6.0 last year, I'm not sure if you have tried that version?
We have made continual improvements to the ease of use of the application itself and the upgrading tools in v6.0 and later.

Commentaires: Overall, I like SpiraTeam. There's a bunch of different ALM solutions out there. I prefer something easy of a lot of confusing functionality. SpiraTeam is somewhere in the middle. It has a good balance. I use it for keeping track of test cases, but don't use the requirements functionality. I wish we did use the Requirement functionality, but the developers I work with have a thing about NOT documenting what they are developing... In any case, I can produce the results of the test effort rather easily so the rest of the team can see where we are within the project.
Some of the annoyances are the ability to produce a report and distribute to the rest of the team. With the templates that SpiraTeam provides, I would like something a lit bit different. The templates just don't provide the information that I need. I know there is a way to modify the templates, but never had time to devote to figure it out. Also, the way arranging tests in folders and then moving tests around in the folders has been difficult over the versions of SpiraTeam. I like how tests are arranged in that way. It helps keep everything organized in a good manner, but the implementation of it is not entirely perfect. test cases often get put in the wrong place and have to spend some time moving them around. My last annoyance is how test cases are copied and pasted. When pasting a test case, it places it on the top of the test case I copied, not underneath it. That bugs me more than anything.
But when judging SpiraTeam as a whole, I do like the product, but it's those little interface annoyances that get in the way.

Avantages: I like the concept of how test cases are arranged, within folders.

Hi Tom
Thanks so much for the very fair and detailed review, we appreciate the time you spent writing it.
I would like to mention that in SpiraTeam v5.0 we completely overhauled the test case and test set folders in line with the issues you identified, so please try out the newest version and let us know if you have any suggestions or feedback.