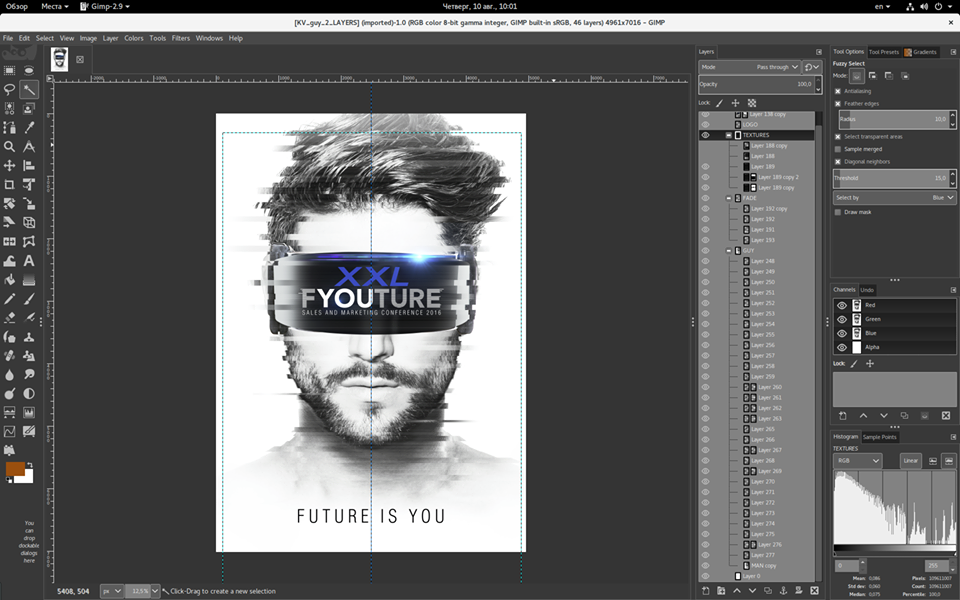 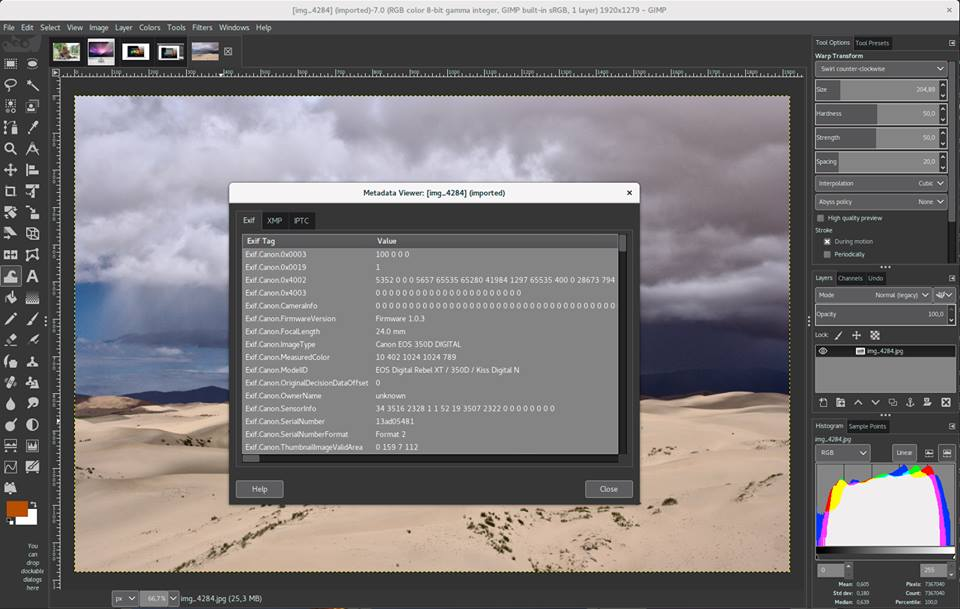 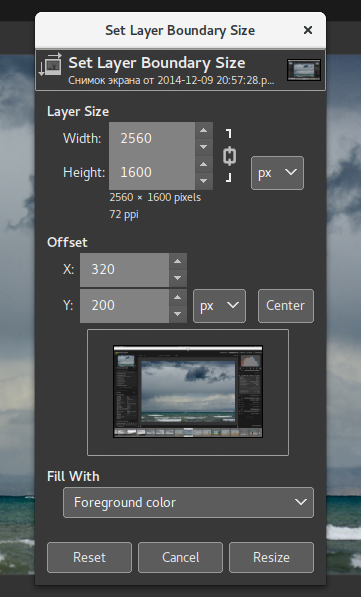 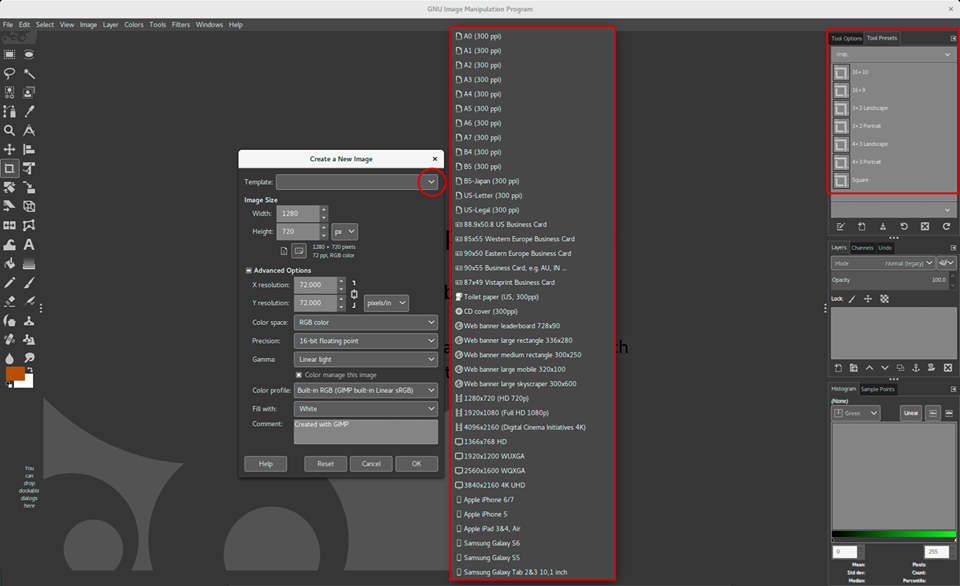 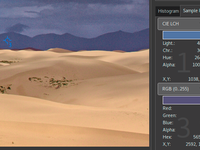 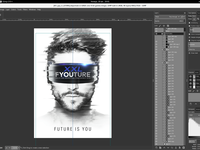 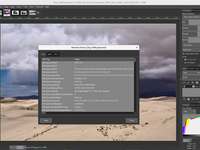 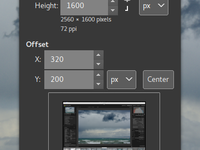 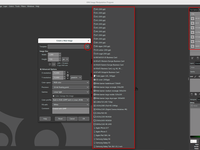 Avantages: I have been using GIMP for a few years now. Earlier on, my experience with this software was not quite right. Now that I am more advanced in graphics and photo edits, I have come to appreciate this open open-source image editing platform. Believe me, when I say this software is excellent, it is because the results are impeccable. GIMP has it all! Its excellent array of features are so good that they can rival adobe photoshop capabilities. These features allow you to tune photos, images and create an artwork of your own. As a graphic designer, you will be able to seamlessly crop images, make colour adjustments, customises brushes and adjust gradients among others editing. Here are some of the advantages of using Gimp over other image editing software. 1.It has incredible, and quality features making it the best among open -source programs 2.Single-window mode operation which is great for single pc operation. 3.GIMP is 100% free. 4.It supports plenty of image formats such as GIF and PDF. Additionally, GIMP is customizable such that you can add and remove menus or icons on the fly. 5.It is easily extensible to ease image manipulation with the third party. 6.Last but not least, GIMP works efficiently on all major operating systems. Whether you choose Linux or windows, results are always impeccable.

Inconvénients: the script-fu is not user-friendly. GIMP lacks intuition on new users and can make their experience pretty cumbersome. Some filters and effects don't explain or guide how the image should be modified. It would be awesome if it would support PSD photoshop images. It does not open some files such a JPEG.

Commentaires: Overall, GIMP is a fine open source replacement for PhotoShop and some of the other expensive creative suites. For a layperson who occasionally designs a banner or image for their website, GIMP is probably overkill and downright daunting. But for a graphics design artist or someone who likes to dabble, the toolset is robust, with elements to rival its commercial counterparts. I don't mind dabbling and doing my own simple graphics. As an open source proponent, I like using tools that give you the freedom to do with them as you please. For example, I use GIMP on both Windows and Linux platforms. GIMP has been a staple in my toolchest for many years. Its a solid choice for heavier graphics work; I use it alongside simpler tools (like screenshot utilities) and in conjunction with snazzier tools like Canva.

Avantages: powerful punch: The GNU Image Manipulation Program.) GIMP is software you install on your computer. To my knowledge there is no SaaS (online software-as-a-service) counterpart. As a regular Linux user one huge benefit for me is that GIMP was initially created for the Linux environment. But unlike many Linux programs, GIMP has a true Windows version that is not poorly ported over. It's as elegant on Windows as it is on Linux. There are no penalties for installing GIMP on each and every computer you own and I've never encountered problems when mixing and matching the files from different flavors (i.e., Windows or Linux). It's rock steady; I don't remember a time when GIMP actually crashed. And if you are ready to exit, GIMP always reminds you to save any unsaved changes to your designs. GIMP has a simple uncluttered interface. "Simple interface" is relative; many menu items have dockable windows (like its commercial counterparts) so managing the various docking windows is what will keep it simple and uncluttered. One of the first things I ever used GIMP for was to import and edit some graphics saved in PhotoShop. I'm not a designer so I don't understand what half the tools do; I use only a few of the many features on a regular basis. Primarily I use it for quick web graphics, banners and graphics for blog articles, converting images to different formats, and sometimes to take screenshots (but others screenshot tools are quicker and more intuitive).

Inconvénients: It would be nice to have a few "modes" that hide or reveal tools based on your anticipated usage. For example, a "novice" interface mode would be nice. The help system is decent but is a bit cryptic and designed for the designer (not a layperson). I would love to see better intuitive context-sensitive help. For example, hovering over a tool would give a much more understandable explanation. The screenshot tool could be more accessible (when not working in GIMP).

GIMP is great, if you know what your doing.

Commentaires: Fantastic but it's a complicated software for the uninitiated.

Avantages: This is a very robust and useful image editing software akin to Adobe's Photoshop suite. It's quite useful and features a ton of the same or similar tools you'll find in the aforementioned suite, with one exception. GIMP IS COMPLETELY FREE TO USE! It's fantastic and nearly as good as Photoshop in every way. In fact, you can find many Photoshop tutorials online and the same exact steps will apply to GIMP to get the same end result for any effects your trying to create!

Inconvénients: Photoshop isn't the easiest software to teach yourself, you have to be extremely tech savvy to accomplish such a feat. The same applies to GIMP. If you don't already know how to use Photoshop going into GIMP, you better read up on how to use the software or get some one and one training (or even take a college class or something). If you don't, you'll be lost in trying to use the software to edit images. There's always YouTube tutorials these days.

Take the time to learn, and GIMP is rewarding

Commentaires: For me, GIMP was a replacement for Photoshop. That being said, I've been totally impressed by the way GIMP has grown over the years. In its current iteration, GIMP can accomplish any image editing task I've thrown at it -- often, this required me to spend time learning how to best accomplish that task in GIMP, but that time has always been rewarded with high quality outputs. Still, I have probably spent as much time fumbling around in confusing with GIMP as I have actually working.

Avantages: Unlike a number of other free image manipulation programs, GIMP is both extremely powerful and (relatively) simple to use. Users of Photoshop will not find it to be the most difficult transition. GIMP has just about every feature an average or casual user could want from an image editor. GIMP works well not just for editing photos, but also for digital drawing and graphic design. In most regards for most users, GIMP can do whatever Photoshop or other commercial programs can. That being said, the functionality of GIMP should not be perceived as Photoshop lite. GIMP offers more tools, brushes, presets, etc than an average will ever need, and that's before installing any extensions. My current work requires minimal graphic design work -- largely infographics and visual representations of data -- and GIMP has every tool I could possibly need to produce data visuals / improve those produced by other software.

Inconvénients: While GIMP has become more user friendly over the years, there are two points new users may find intimidating. First GIMP -- as the full name suggests -- is part of the GNU/Linux lineage and ethos. Users unfamiliar with all this will probably be confused, especially as it relates to saving proprietary formats. Beyond that, amateur image editors will probably find themselves overwhelmed by all of the tools offered by GIMP. Some of these basic tools work in unexpected ways based on prior knowledge of other software -- on its face this isn't problematic, but the different way of operating sometimes isn't logical. New users will likely find themselves bewildered by the breadth of menu options, and the sub-options that go with them. I am certain of this, being that I've been using GIMP for years and I still occasionally find myself confused.

Commentaires: I have cherished Gimp and been utilizing it for well more than 4 years currently, dependably had the capacity to achieve what I've endeavored to do. Much obliged to you Gimp group for making my life simpler, you folks are astounding!

Avantages: The positive viewpoint that emerges from Gimp is that it is an extremely light software that does not possess much space in the memory of our group. Likewise, it is free and has a place with the group of free software. It offers extremely great work instruments that permit to grow professional designs. It is valuable and in the meantime fun.

Inconvénients: GIMP may have a few confinements contrasted with Photoshop. In any case, I trust that this program offers the privilege for nothing. I might want it to improve a little the determination by shading since once in a while it isn't so exact.