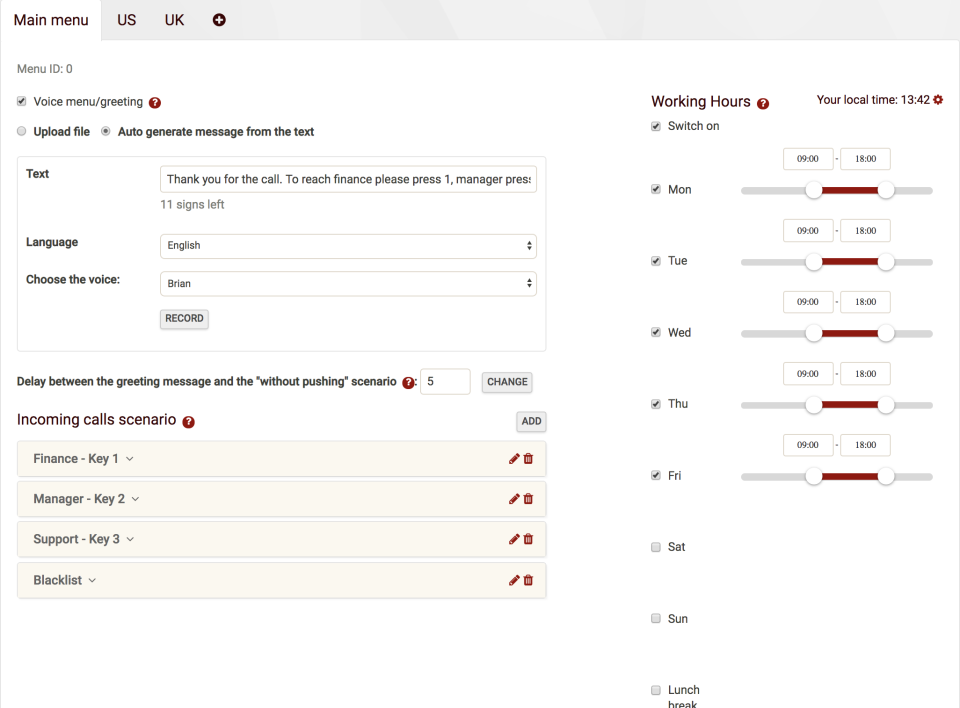 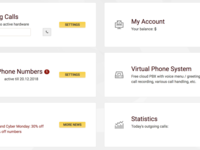 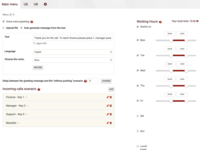 Ease of use is the key

Avantages: Zadarma is simple and easy to use. Non-tech guys will get along with it quickly. Phone calls quality is decent.

Inconvénients: I found no big issues. We are a marketing agency and Zadarma gives us all we need in terms of distant calls.

Avantages: Zadarma's range of supported VoIP features provides excellent value. In particular I find that their virtual number deals make sound business sense. By taking virtual numbers, small and medium size firms are able to compete on international markets in a way previously only open to large companies. For example, from my office in the USA I can open and run virtual offices in the UK, India, Russia and many other leading business centers. It saves a small fortune in office, personnel and travel expenses while tapping into growing markets. I also find their free cloud PBX (they also call it a business phone system) brings many benefits to both the employees who communicate through it, and customers who call the firm. Since they can receive calls on a desktop computer, IP phone and smart phone, or forward these calls to mobiles and landlines, those important business calls no longer get missed. In my experience, customers certainly appreciate a positive calling experience. This significantly increases the possibility of that customer placing an order and coming back again to make subsequent orders.
Finally, there is no denying that the cost savings are a big attraction. It is hard for landline service providers to compete when they have to carry the heavy costs of phone cabinet and wiring installations and repair. This VoIP service seems to me to be a much more economical choice without compromising on call quality.

Inconvénients: I had some initial difficulties with the app setup but when I turned to their customer service they provided me with the help I need to quickly complete the setup. The way their app runs down the battery life was also an issue that bothered me. I contacted Zadarma and they reassured me that in the coming new version of their app they have taken care of this problem.

Avantages: We are using Zadarma Sip features for over 2 years integrated with Bitrix CRM. We weren't content with the phone solutions Bitrix offered so switched to Zadarma. Best decision we have ever made. Right now we have over 10 different numbers in 10 countries. We sometimes have hard time to connect to some countries' mobile numbers but that's normal considering the country's infrastructure.

Inconvénients: Nothing much so far. Just mobile calls are a bit more expensive than others. Also, virtual numbers in Turkey expensive and can take up to 2-3 days to activate. Still, it is not their fault.

Commentaires: I was able to receive International SMS from Israel cheaply. The account verification process and the support ticket process are cumbersome and wearisome to pursue.

Avantages: The Zadarma Projects provides cheap virtual numbers and free SMS reception service on those numbers. After much pushing and continued engagement, I was finally given good customer service.

Inconvénients: Zadarma numbers work on a monthly subscription basis. However, they will block use of certain features of your virtual numbers. This happened to me, creating a situation in which I was paying for a virtual number, but could not use the free SMS reception feature associated with it. For five days, the Zadarma support team refused to extend my subscription length to compensate for the time which they had blocked this desired features of my number. Interaction with the Support Team was extremely frustrating and slow. They would respond to me once in every 24 hour period, and their responses were unhelpful. They repeatedly said no in multiple ways to my requests. Once I gave up perusing the support team for compensation and asked to be referred to management, I was given excellent customer service. Management unblocked the desired feature of my number, and extended my subscription to one month from that day. The blocking of account features has to do with the Zadarma account verification process. They request the uploading of passports or ID cards. I uploaded my ID card on day one, and my passport on day three. Both were rejected. The ID card was rejected on day two for the stated reason that it was not a passport, despite the fact that account documentation requested a passport or ID card. The passport was rejected one day five for the stated reason that the file size was too small, despite the fact that no minimum file size limit was visible to me in my account documentation. It was only after requesting to be referred to management on day five that my account was verified with my uploading any additional documents.

Dear Mr Ockrin,
We regret to see that you have not been satisfied with our service. We believe that there must be a misunderstanding, since your phone number and the voice features connected to that number have never been blocked. As it is clearly written in the instructions, to activate the SMS reception on your number, we require you to upload a copy of your passport. This was done on your side 5 days after you have purchased the number. As soon, as the requirement for the activation of the SMS reception was fufilled, and you have uploaded the copy of your passport, we have enabled that feature on your number straight away. In addition, we have also extended your number for 5 extra days and we did not refuse to extend your subscription length. All of the chats between you and our Customer Service representatives show that your enquiries have been answered promptly and on time.
Best Regards,
Zadarma

The service and quality is good, While CS was poor for a while; however lately it was improved

Commentaires: easy to use, exception installation and application. moneywise is reasonable

Avantages: Software, I mean the App for the I phone is great and easy to use. Softphone on the web is easy to operate, while the general menu is still confusing.

Inconvénients: While App is great , However, the functionality buttons should enlarged. The activation and tune in process is still quite complicated. Recently, during the reinstallation on a new ios device I've spent 30 min myself + another 15 min with a CS. Also, the general menu is too complicated and confusing; the simpler version , like Line2.com for instance is advised. Customer service, especially voice support must be improved.