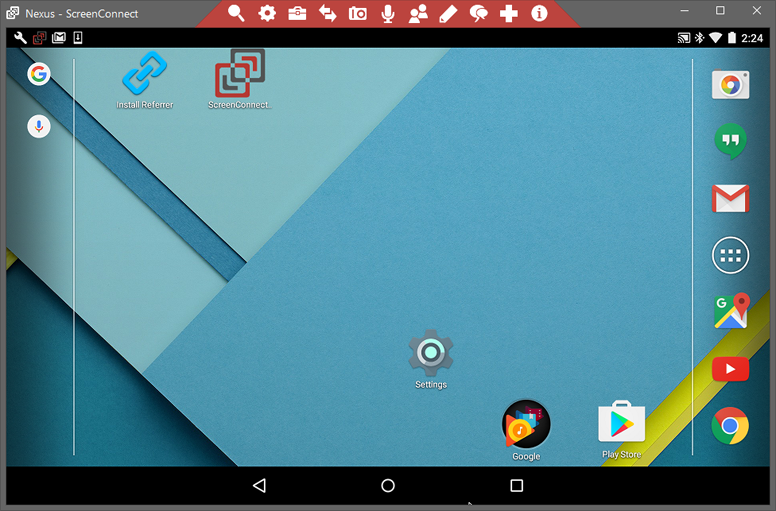 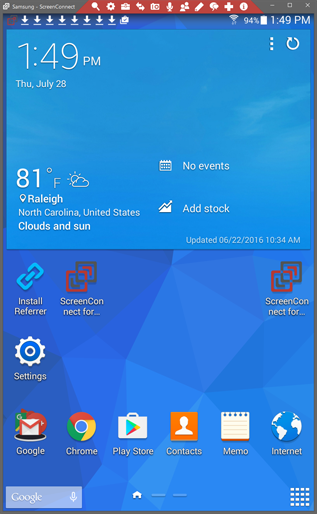 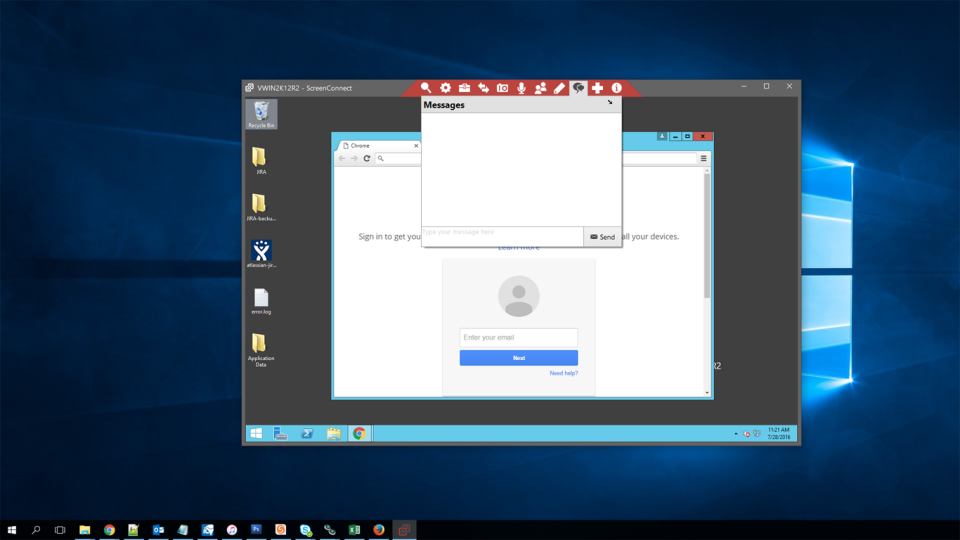 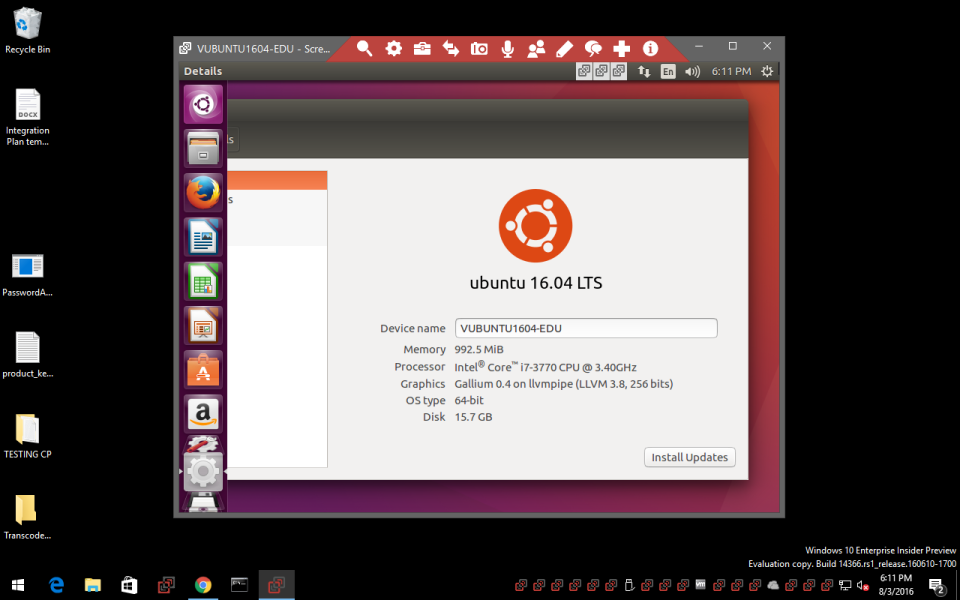 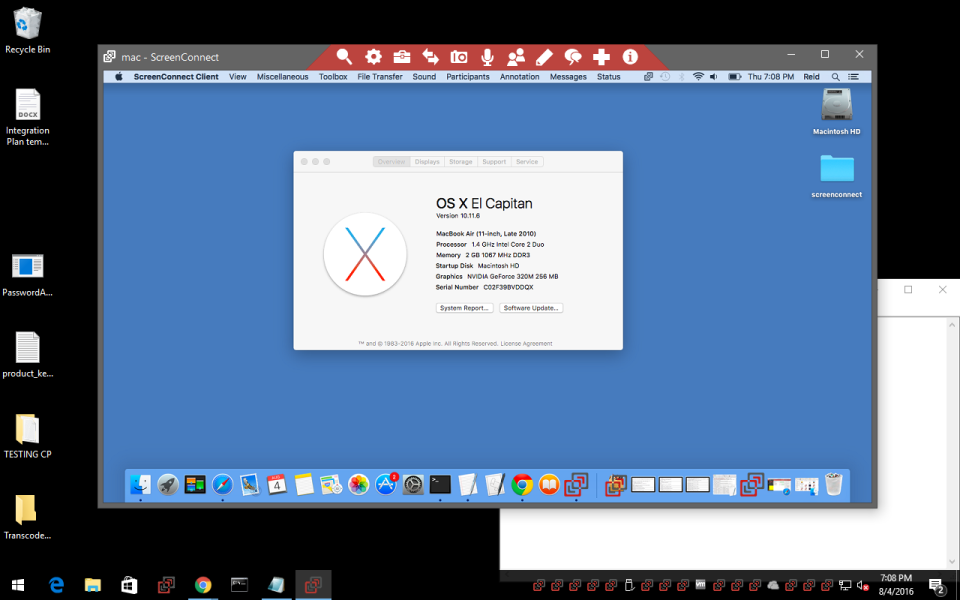 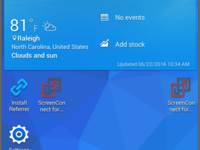 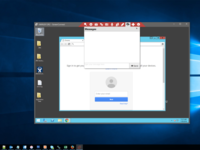 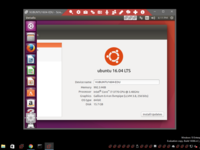 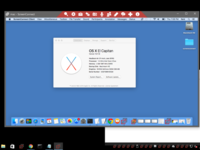 A great solution for a one-man-shop

Commentaires: It just works. It's super-ridiculously reliable. By that I mean, I've used MANY other remote support software solutions over the years, and while this one might not have the perfect clarity of an upscaled resolution, it has yet to fail me on a connection. I deploy them via MSI, occasionally update them from the admin interface, and ... thats it! It just works!

Avantages: Compatibility, deployment (MSI package), and customization (can configure the server with addons, that in turn help you configure the client much faster than other solutions I've tried). AUTOMATIC NAME UPDATING. This was HUGE for me! This was the main reason I moved away from GoToAssist. I worked with GoToAssist support multiple times, but they couldn't help me get anything in place to do this. Essentially, if a PC name changed, the GoToAssist Server kept it's name listed as the "old name" - this lead to tremendous amounts of confusion for me and made it almost impossible to know which computers needed updating and which were already the correct name, simply connecting to support a user was an issue after just a few computer moves. Deploying software to 50-some machines might not be as large a task as other companies out there with 500+ machines, but as a one man shop, keeping those machines updated to ensure versions match, and names of the PC's are kept intact when users retire and new folks come on board is a HUGE time saver and stress relief after swapping to ConnectWise Control.

Inconvénients: Poor screen scaling (when compared to a competitor like TeamViewer), slow multi-monitor (becomes a sluggish because it seems to want to stream all screens at once, even if only one is selected), and ambiguous information as to whether another third party who also uses the software has left theirs installed / potentially could cause exploitation and already causes confusion. Scaling:
If I connect to a machine with no other users on it, I believe I should have the option (via the "join w/options" link, perhaps) to change the connection to match my resolution (similar to how Microsoft's own Remote Desktop or TeamViewer do) Additionally, even if it's unable to match my connecting resolution, If the built-in scaling were better (I.E. - if there was a feature that introduced some good hardware accelerated anti-aliasing), the daily use of this software would be greatly improved. Multi-Monitor Sluggish:
I've seen this with some other remote connection software - even the more legacy VNC protocol suffers from it, but it is avoidable because not all have this issue. I think the software needs to only stream updates to the primary selected monitor - or at least have an option to enable that, because delays become a huge problem when navigating things like complex databases or even simple excel sheets when there's a full-second delay. This does not happen on single monitor connections right now, it becomes noticable on dual-monitor, and on triple monitor it's very obvious.

Commentaires: I've used many remote access tools in my few years as an IT professional. None have come close to the quality, speed, and reliability of ConnectWise Control.
If you've read any of my other reviews of ConnectWise products you'll find a common theme, we started using the product shortly before the acquisition. In the ScreenConnect days the tool was just as good and it was impressive to see how smoothly this tool was brought into the fold. ConnectWise Control will never leave my mind as the pinnacle of remote access tools.

Avantages: The service/local application. Its so fast to reconnect after disconnection. It is so reliable in staying up even when the machine is under great stress otherwise. This is just a solid piece of software that does exactly what it needs to and then some.
The added features are all cohesive and add to the experience of remotely assisting our customers.
This tool filled a VERY much needed gap in the ConnectWise suite of tools and really made for a holy trinity for technicians day to day ease of use in working tickets in Manage, running commands and maintenance out of Automate, and immediately helping clients with Control.

Inconvénients: Managing the server yourself had the usual annoyances of having to do so, but also the positives. I believe they will host you now as well. Honestly there is very little poor to say about this product!

One of the best remote tools I've ever used !

Commentaires: The company I work for is supporting over 300 customers and when I came to work here, all remote connections were manually made. Ofcourse not so efficient.
So I started to implement Devolutions Remote Desktop Manager, where I could create a lot of our remote connections but unfortunately not all.
Especially the remote connections which need a VPN connection before using RDP to remotely connect to the server. It is possible in RDM (jump to a virtual machine on the network, start the VPN connection there and then RDP into the server), which is time consuming (over 2 minutes per session). Therefor I was looking for a quicker solution, but still with the security a VPN connection has to offer.
And then I found ConnectWise Control, which does all that. Once I tried the trial version and extended it (with help of the CW support team), I was sure this was the solution I was looking for.
Now it only takes me 15 seconds to remotely connect to remote server.
And not only me, but thanks to the integration in RDM my fellow colleagues can use the same configured session and start the remote connections.

Inconvénients: The set up of email notifications can be a little difficult to master. Once mastered, it's quite simple.

Simple, Easy to use

Commentaires: Initially used ConnectWise Control (Formerly ScreenConnect) for simple IT support sessions (credential resets, issues with software, etc.). Later deployed agents to network. We found this product much more superior than other alternatives available on the market such as Kaseya. Sessions with speedy, and tools were easy to use like viewing one monitor individually, or performing maintenance discretely in open office environments. Allowed for support sessions to be performed remotely by staff extending the teams' effectiveness even in inclimate weather or times when IT staff worked remotely.

Inconvénients: - Difficult initially to setup department groups of computers,
- Not a lot of documentation on setting up webhook scripting,
- Database maintenance can be tedious
- Outside basic functionality (which is all you need), selective and limited add-on options and integrations (compared to other product Automate [labtech])
- Uses Java over HTML5 only.

The price is right, it has enough features that were not that easy to integrate, its reputation has

Commentaires: see above
you could have had the market targeting alot of users and devices all around the world with your good fair pricing but everything else is not so good as it was -- with webex, teamview, logmein, ultravnc free,
dameware, Zendesk, anydesk, realvnc just to name a few
we as IT professional cant afford to look stupid with virus threats coming up with screenconnect
and telling people all these instructions to get control your one step installer plugin never worked !!
but good pricing kind of scary that others offer like sysaid and others not offering anything for the small guys like you did --- by the way i was talked into the AUTOMATE product --- worst product ever!
i spent a bit over a half a day cleaning it off and restoring all systems. It would not do what it was suppose to do at all --- slowest connection and unusable at all it was connected but would wind up my systems on some process i had to shut them down and clean the drives of any traces of AUTOMATE -- no software has done worse and your sale and support did not believe me i showed them proof they laughed and said they have never used it professionally
thanks any more information happy to help
maybe you could be the next big thing all the ideas are there but it all fell apart and you need to do almost a 180'

Avantages: THE price compared to TEAMVIEWER AND LOG|ME in
i was not a large operation so the licensing suited
i loved the idea that i could make it a subdomain of my site or just have a link and it was White labelled
affordable
once i was remotely connected it was fine
It has many integrations and partnered up with a lot of companies

Inconvénients: Its a pity you have not a better business relationship with antivirus companies
in most occasions and it was happening more and more that it would be picked up as a virus --- not good and worrying
it has many integrations and features ---- these features were hard to install and because there was many versions - most the time hard to get the right compatibility -- these integrations should be one click or a signup here and there --- i wouldnt have minded paying good money if these would at least work
It was not very intiutive some tasks -- like the whole process i would go through with clients
download the exe or file
then double click on it --- if you miss it , it will be in your downloads
then click run
follow prompts
then allow
and no at this point i would sometimes get a prompt to update the software
not good, not good at all
your sales and support staff could not give a dam because i was a small 1-15 users account
it was not very easy and intuitive initially to do file transfer - have you used team viewer?
most respectable organisations wont allow 8041 port through there firewall
it has lost its good reputation that support users at the large universities have originally given it
being considered unsafe and treated as a threat - i know that i could make it an exemption in the AV software but it came up as threat after the fact as if it later was damaged as professional tool
with all the quality secure easy products on the market these days | cisco
webex|