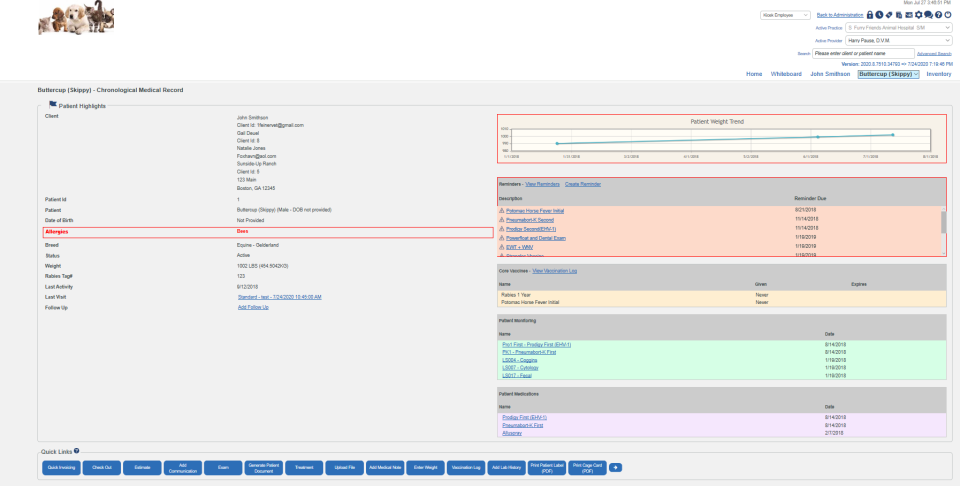 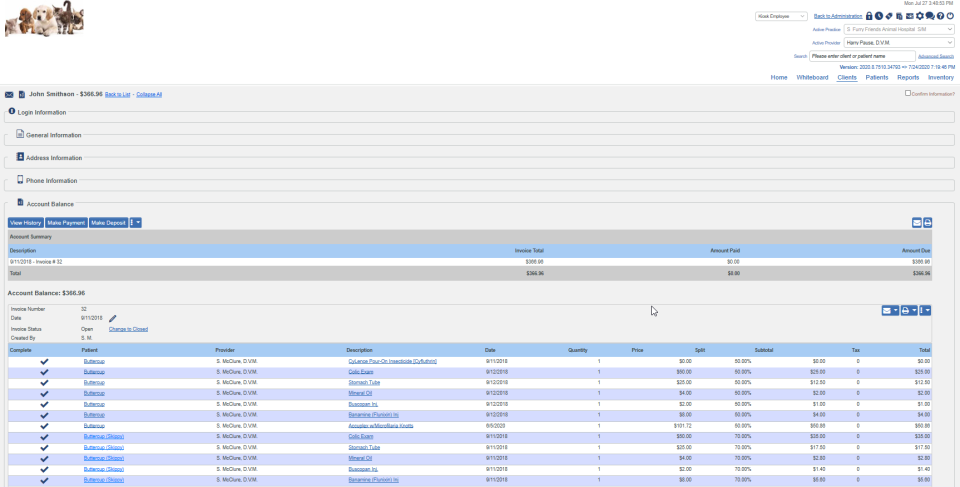 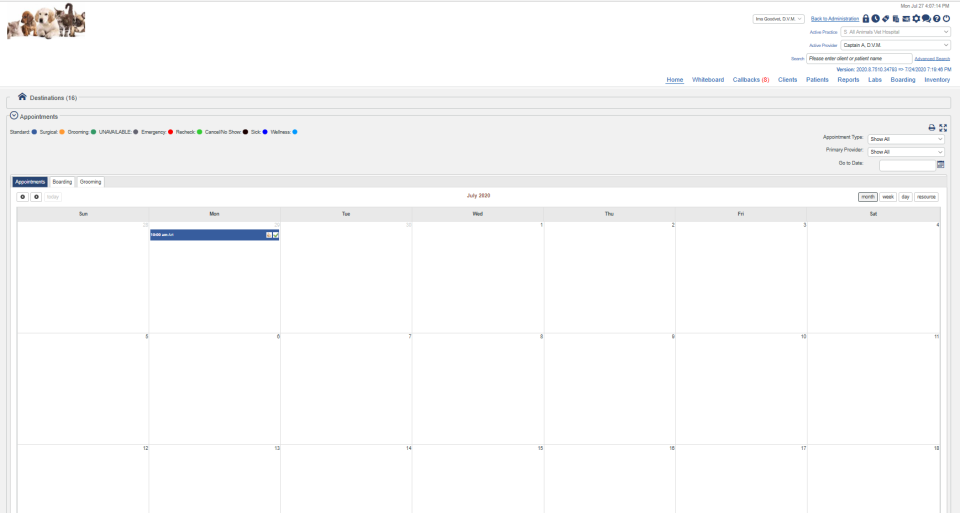 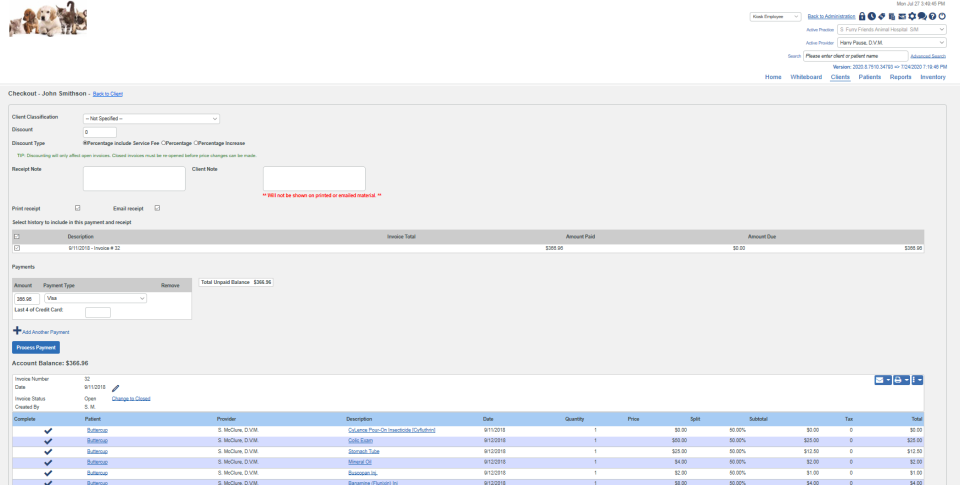 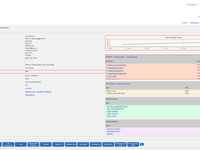 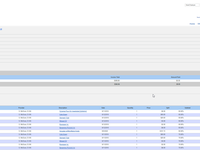 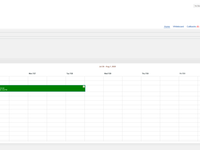 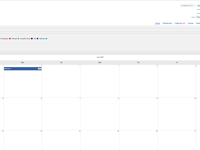 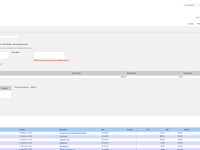 Inconvénients: Navigating it takes a while to get used to, but worth it!

Thank you for the kind review, Caroline!

"Good Software that Continues to Improve"

Commentaires: Overall, I have had a great experience with eVetPractice for a cloud based system and I look forward to seeing how they develop and what they add from here!

Avantages: It is more user friendly that some other software options. The fact that it is cloud based and can be accessed from anywhere was key for our purchasing decision. I like the fact that they continue to add features.

Inconvénients: There are some features that are not available that I think should be common in veterinary software. When we ask about them, they add it to the features request list, but sometimes this takes a long time to get implemented. Example: ability to prevent some employees from making changes to the schedule. Hopefully will integrate with IDEXX xray systems soon! Would also like the ability to link multiple inventory items without making a package, and ability to zero out cost of linked inventory items.

"Disappointing, a waste of time, energy and money. Very sad."

Commentaires: I really have no pro's. The "idea" of what this software was going to be, was very far from what it ended up being. I loved the idea of going to the cloud. I loved that we would be able to access both of our locations from off site. There were numerous ideas on paper that seemed like it could be an ideal fit. Unfortunately, the idealistic roll out in my mind was far from the reality. I'm going to say this... when you speak to the CEO after you request a meeting, and within 60 seconds of the call, that CEO you are hoping will address your frustrations, laughs at you? Bad start. Now, I know what the response will be after reading my blurb below... something like, "Mrs. McIver, we apologize that you aren't happy with our software" or another similar phrase. But I am writing this not because I want a response, they very clearly told me they completed a "successful" migration and there was no further action they would be taking... I am doing it because I want people to know the facts. Have they had good runs? I'm sure they have! But when they have bad runs, the company's integrity get's challenged, and I am extremely disgusted with the way myself and my employee were treated during our recent conversation.

Inconvénients: The facts of our run: Our first migration failed after the eVet team believed we wanted our two practices to be merged (however, there is not a mention of the word "merging" in any correspondence). This caused multiple issues both in confusion and legal issues. Although the time invested into that was a waste, and the havoc caused by switching software's back and forth was frustrating for the team and clients, we decided to move on and the team corrected the issue by splitting the clinics. The real concern's then came from the following... > The lack of transferring complete medical history by missing vital signs and documents and then being told "that isn't their job". > The mathematical error's experienced (4 to be exact) in only the first 13 days; calculating invoices way off of what the actual amount should be (screen shot's have been taken). > The 82 inventory discrepancies after coming from a clean run on our old software. > Broken links. > The poor client service and amount of time it takes to get answers on anything. The team on their live chat often don't know how to address your concerns, which then leads to them asking for more time to get you answers. So although the idea of live chat sounded really handy, it was very disappointing. > Records being printed with missing communication logs etc. I know our life on eVet was small, but the issues were too big to continue with.

The Vet Visionaries project was a disaster from the start. The conversion process was written and signed by them to merge both clinics, and only after we finished the conversion the group decided it wasn't what they wanted. So fine, mistakes happen, and we restarted from scratch. Then we finished that process and they decided to pull the plug. The failure of this project was communication breakdown, and that communication breakdown was on both sides. That is something we will strive to do better on in the future. The frustration in the review is because they thought they should get a refund on the conversion costs. We thought differently and they decided to write a negative review. We will take the lessons learned in dealing with this group and improve our processes for the better.
I would ask anyone reading this to also read the 73 reviews prior that contain 4.5 to 5 stars.

"Evet Addition To The Practice"

Commentaires: Overall, the transition has been great. It has improved my room turnover time, accuracy of invoices, and integrates with my in-house lab machines. Users can me modified to only have certain access, which has been great for security and accountability. Really don't have any major complaints with the software. Aside from improving financial reporting features I would give the software a 4.5/5.

Avantages: I like that it is cloud based. Eliminated a huge portion of my monthly IT bill. Customer support is great and very knowledgeable. Cost per month for the software is very reasonable. It was easy to learn and my whole staff was competent on the platform within days.

Inconvénients: The reporting features could use some tweaking. Some things can be very nuanced and the financial reports could do with some additions and upgrades. Things have been tough for my bookkeeper and I don't have a great avenue in order to iron out these issues. Customer support is great on daily Evet use and issues but reporting needs its own department of support.

"My Titled Review for eVetPractice"

Commentaires: Since making the switch from IntraVet to eVetPractice, things are fine. All of the porting over of records from old system to new was handled very well by them. The fact that we can choose to access it from anywhere (including my cell phone on days when the power has gone out) is great. The tech support is great, even though they often can't "cure" the specific issue. But they are honest about it, and always pleasant. There will always be some things that this system does better AND worse than that system, but overall, we are better off for having switched to them.

Inconvénients: -when tech support is open, they're great, but since we are on the West Coast and they are not, they close earlier than would be ideal
-the client payment history screen is a MESS (if someone doesn't make a full payment one time, it visually carries over and repeats that not-fully-paid invoice over and over, and makes it a big chore to figure out payment issues)
-reports are less intuitive and less customizable than former software (Intravet and Cornerstone, to name two)
-sometimes, you can see the disconnect between the developers and users with certain options